Fairy Tales in Contemporary American Culture: How We Hate to Love Them is in print!

The hardcover and e-book formats are currently available! Paperback coming in September 2022!

I am available for virtual guest lectures, workshops, talks throughout Spring and Fall 2022. Contact me with the e-mail widget on this page to schedule a virtual visit or to request a pdf of the introduction to this book.

“In the twenty-first century, American culture is experiencing a profound shift toward pluralism and secularization. In Fairy Tales in Contemporary American Culture: How We Hate to Love Them, Kate Koppy argues that the increasing popularity and presence of fairy tales within American culture is both indicative of and contributing to this shift. By analyzing contemporary fairy tale texts as both new versions in a particular tale type and as wholly new fairy-tale pastiches, Koppy shows that fairy tales have become a key part of American secular scripture, a corpus of shared stories that work to maintain a sense of community among diverse audiences in the United States, as much as biblical scripture and associated texts used to.” 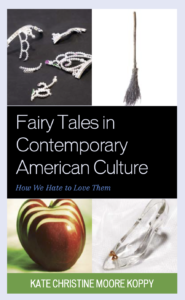 This research begins from the premise that fairy tales are a battleground in twenty-first century American culture. Hundreds of fairy tales enter the cultural space each year and are met with both acclaim and censure.Fairy tales are censured even as we consume them, but these cultural moments have been underexamined in scholarly literature to date. But not only do we consume fictional fairy-tale texts, we use fairy tales to communicate about the world we live in. As recently as the spring of 2018, fairy-tale discourse dominated the popular press coverage of the wedding between Meghan Markle and Prince Harry, as in The Atlantic’s May 18thpiece “The Enduring Appeal of the Fairy-Tale Wedding.” Fairy-tale discourse has also framed the discussion of the Trump family’s role in U. S. politics from the campaign through the first two years of his presidency as in The Columbia Journalism Review’s September 2017 “Inside the Fairy-Tale Mind of Trump.”

This monograph seeks to understand the proliferation of fairy tales—in children’s picture books, in young adult fantasy novels, in popular literature, and on screens large and small—as well as the proliferation of harsh fairy tale critiques—in parenting advice publications, in religious magazines, and in feminist scholarship. Arguments about the value of fairy tales in contemporary American society intersect with arguments about how to raise children to be good adults, about the place of faith in society, about the false dichotomy between faith and science, about evangelical Christians’ persecution complex. This monograph doesn’t offer prescriptive answers to these questions, but it does reframe the conversation to include the intersections among them.

American culture is experiencing a profound shift. Fairy tales (and their popularity) are both a signal of this shift and a reason for the shift. I show that in our increasingly pluralistic and secular society, fairy tales have become a key part of what I call American secular scripture. That is, fairy tales form a corpus of shared stories that work to maintain a sense of community among diverse audiences in America, much as Biblical scripture and associated texts used to. The critiques of fairy tales form another corpus of shared stories. For example, fairy tale critiques create community among the evangelical right as they struggle to reassert Biblical scripture into American discourse.

I analyze the changes in the Cinderella tradition over time to exemplify my arguments regarding the way that familiar narratives become the cohesive glue that a community uses to define itself. Ultimately, The Fairy Tale as Secular Scripture argues that fairy-tale adaptations and retellings should be examined alongside and in conversation with the canonical literary and cinematic texts of the long twentieth century. If we fail to examine fairy tales and their role in shaping American narratives of selfhood and nationhood, we risk missing that we are a culture that needs the fantastic to make sense of our past and to imagine our future. Fairy tales are the common stories we share across ethnic and religious divisions.

The full book proposal can be found in the Humanities Commons Core.

My article “Putting Words in Their Mouths: Russian Bylinias Discursive Space”(Folklorica 2016), excerpted from my dissertation “Cinderella and Other Fairy Tales in Contemporary America and Russia,” examines a similar dynamic in contemporary Russian animated films. An excerpt from the chapter “Old Wine in New Wineskins: Fairy Tale Pastiche on Film” won the Ralph Donald Award for Outstanding Presentation Mid-Atlantic Popular Culture Association (Baltimore, November 2018) and can be read at Response Journal. I have also presented portions of this monograph at the annual meeting of the Popular Culture Association (Washington, DC, April 2019) and as a Profs and Pints lecture (Washington, DC, January 2020).

Much of the research for this current project grows out of my dissertation work “Cinderella and Other Fairy Tales in Contemporary America and Russia,” represented below. 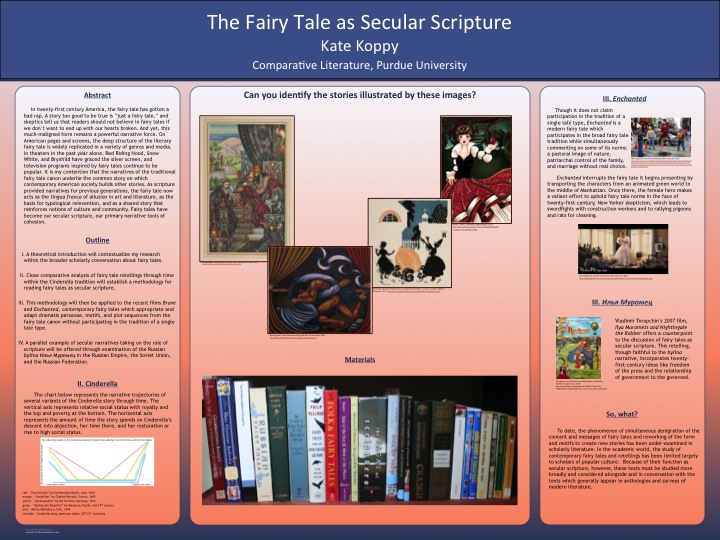 Find me on Mastodon @katekoppy@c.im

This site is part of Humanities Commons. Explore other sites on this network or register to build your own.
Terms of ServicePrivacy PolicyGuidelines for Participation